Cycling in the Time of Climate Change 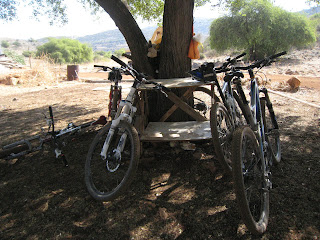 You don't have to be a meteorologist or scientist to notice there is a change in the seasonal weather patterns. You only need to be a mere outdoor enthusiast who marks and notes the conditions each time when venturing out for an activity under the open sky. Something is definitely happening up there in the vast blue yonder

I have been noting temperatures for twenty years now whilst logging the rides of the Carmel Mountain Bike Club. The ride last Shabbat had unusually high temperatures for the season, as indeed had two of the three previous rides - tyre melting mid 30's ! Riding up mountains (struggling in my case!) towards the middle of November with a sun beating down at 37C is definitely cause for concern. This is a new experience for us all in the club, and affects the performance of the riders and the planning of the routes.

For those of you who take an interest in the burning issue of cycling in the time of climate change here are the temperatures over the last 5 years taken on approximately the same date of a club ride (early November, in Israel):

And so it was , on the ride, last Shabbat, when the club met at Rama in the Lower Galillee in Northern Israel.

The early morning climb through the olive groves to Deir el Assad was pleasant enough. The olive picking season is underway (perhaps a little earlier this year - the climate, again!) and we had to bypass the local villagers in their beat-up pick-ups scrambling up the slopes to start the tree beating. We continued up the road to the sound of music from the fields at Parod, a more commercial festival of the Olive Season.

We went on up to Shefer, by way of a very over-grown, un-rideable, jungle of a trail, but at least we were pleased on the shade it afforded. By the time we reached Amirim we were ready for a breakfast-break, admiring the fantastic view over the Galillee Mountains.

Afterwards, the temperatures were climbing, but we didn't really care, as we were descending, down the dusty 500 metres drop to Nahal Amud. This is one of one of the best mountain biking descents in the country, and we made the most of it. Broad smiles all round.

The atmosphere changed in the mid-day sun, as we climbed up from Nahal Amud to Ein Livnim. My energy levels were draining away in the heat, and others were suffering too, especially the local wild-life. We saw little mammals (hyraxes ?) stampeding to the cool shelter of a tunnel under nearby road #65.

The push up Nahal Livnim was slow and labourious, and the punctures were beginning too. This is no coincidence either, as I am sure the temperature levels affect the preformance of the anti-puncture inner tubes . Also, the continuing dry conditions have made the terrain very sharp and thorny.

By the time we reached the foot of Har Hazon, the mood in the group was to cut the ride short and leave the ascent of this peak for another time, perhaps in cooler conditions. We had already climbed over 900 metres in just 30kms, so that was quite sufficient for the majority of the riders.

I await with concerned interest to see the conditions that await us on our next monthly Shabbat ride in December in the Judean Desert. Mud, flash floods, snow ?? Stranger things have happened and will happen, while cycling in the Time of Climate Change !